Almost One Year After Tragedy

Revisiting a heartbreaking day in Lebanon 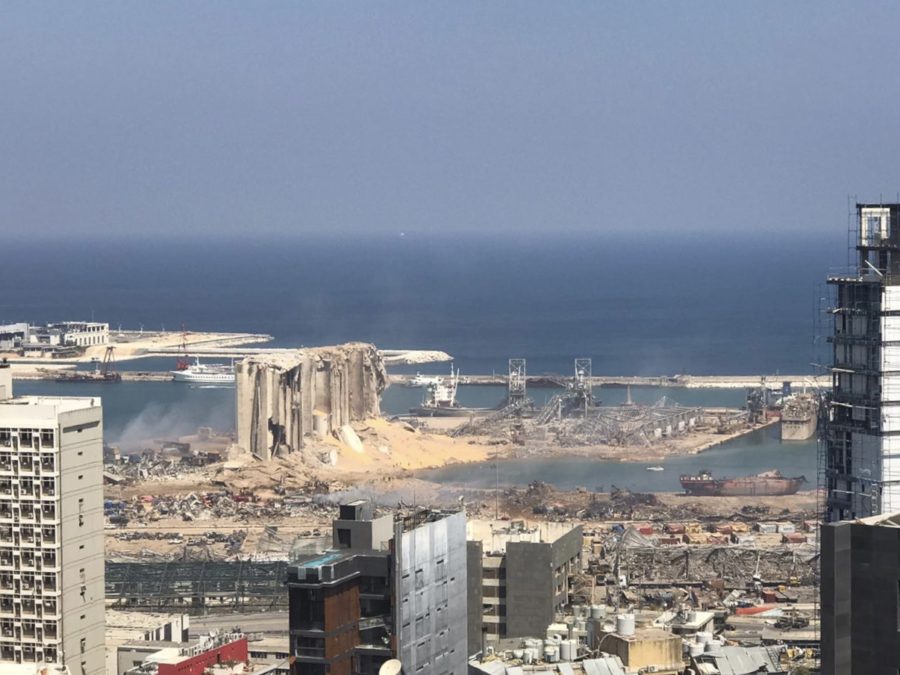 It has been eight months since the day that changed some of my family’s lives completely. An explosion happened at the ports in Beirut, Lebanon, killing at least 215, injuring over 7,000, and destroying the homes and affecting the lives of so many people, including my family.

My uncle’s store was completely destroyed alongside my grandma’s house, which caused her to stay in my family’s apartment. The explosion was incredibly ill-timed: prior to the explosion, Lebanon was and still is going through an economic catastrophe. There is an inflation crisis, government issues, the pandemic, then it is topped off with an explosion. For me, the hardest part of that day was knowing that no matter how scared or worried I felt, it was only a fraction of what my entire family was going through. So now eight months later, I decided to write this article and ask my family members about their experiences.

“The explosion of the port of Beirut in August was a very traumatic incident for the Lebanese, especially the people living in the surroundings of the port.” says my cousin who was at her home in Beirut when it happened. “Beirut was almost destroyed; entire families were physically and mentally affected.” The economy was already struggling before the explosion and now with it, it’s struggling even more. “The economy has certainly been affected even more by the material damage and the massive destruction of buildings, businesses and even hospitals.” she continues. Living in a country with all that going on is very difficult on a lot of Lebanese people. “Faced with all this, thousands of Lebanese have no other options than to emigrate. With those departures, the hospital sector is going through its worst periods as several prominent health professionals are fleeing the country.” she finishes. Her fiancé was at his work, located right near the port, when it happened and was injured.

“I believe that the explosion was the worst thing that could ever happen, especially because even before it, everything in the country was going bad. It was like our lives were turned upside down” says Nour Nasr, who was in the mountains with a friend when it happened. “We were sitting on a rock and then we heard  the noise,” she says. “We panicked because it was so loud and we thought it was something coming at us (like a missile). It was very stressful, everyone was panicking and crying.” she continued. It is still difficult to think about the

effects of that day on the citizens in Lebanon. “It led to most students leaving their country just traveling abroad to get away from the mess. It was very hard to witness that, and until today, it still hurts to think about it.” With the explosion happening destroying the city and the economic crisis, Lebanon is going through a very rough time. Shopping at the mall for new things doesn’t happen anymore. “Buying clothes? Just stick to what you already have, because jeans now cost more than some people’s salaries.” Watching so many people lose their homes and lose everything is really difficult and heartbreaking. It’s hard to keep your head up when there’s one thing after the other happening. “So honestly, right now, there’s no hope for this country.” she finishes.

Joseph Abikaram was also far from the explosion when it happened, about 30 km, (18 miles) on a hike in the mountains but still felt it. “We started running towards our car to go home, since we were terrified.”Abikaram said. “Before getting home I didn’t have any connection so I couldn’t check if everyone I knew was alive.” Abikaram continues. There were a lot of psychological effects and trauma after this explosion. “Many Beirut residents have developed PTSD.” Abikaram says.

Life in Lebanon has significantly changed, specifically for Abikaram. “We used to go out with friends every weekend in Beirut to have dinner or to party. ” Abikaram says. The places that he used to go to with his friends are now destroyed.

With all of the problems in Lebanon, people are becoming more scared of crime. “Gunshots are not uncommon lately and insecurity has increased due to crimes and theft caused by the economic crisis.” Spending habits have changed because the inflation crisis is so bad. “Prices have tripled if not more so we have to be more careful. My father was forced to leave us and work outside the country and open a new bank account.”Abikaram finished.

One of the most moving things that I’ve ever seen is seeing every teenager in Lebanon the day after the explosion helping to rebuild the city. Among one of them was my cousin Maria Nasr.  “We were hundreds if not thousands on the streets cleaning up, assessing the building’s structures, and distributing food boxes.” Nasr says. Life before the explosion was already difficult and became a hundred times more difficult after it. “The future was so uncertain that everybody started rationing, working on escape plans etc… ‘just in case’ a war breaks.”

A terrifying thing was that our grandmother was injured during the explosion. Hospitals were struggling a lot before hand and had reached full capacity after the explosion. “My father, brother, and I drove into the apocalyptic city to take her to the only doctor available to stitch her knee, a dentist.” Nasr says. “It is impossible to talk about how the economic crisis or how the explosion impacted our lives because every single thing that’s been happening is intrinsically linked.” Nasr continues.

Lebanon in the last year has been through the worst. Life for everyone flipped upside down changing everything that they thought they knew. They had to adapt to new standards and a totally new lifestyle. Nour Nasr and Joseph Abikaram summed it up perfectly by both saying that citizens in Lebanon “don’t live,” but are “just trying to survive.”