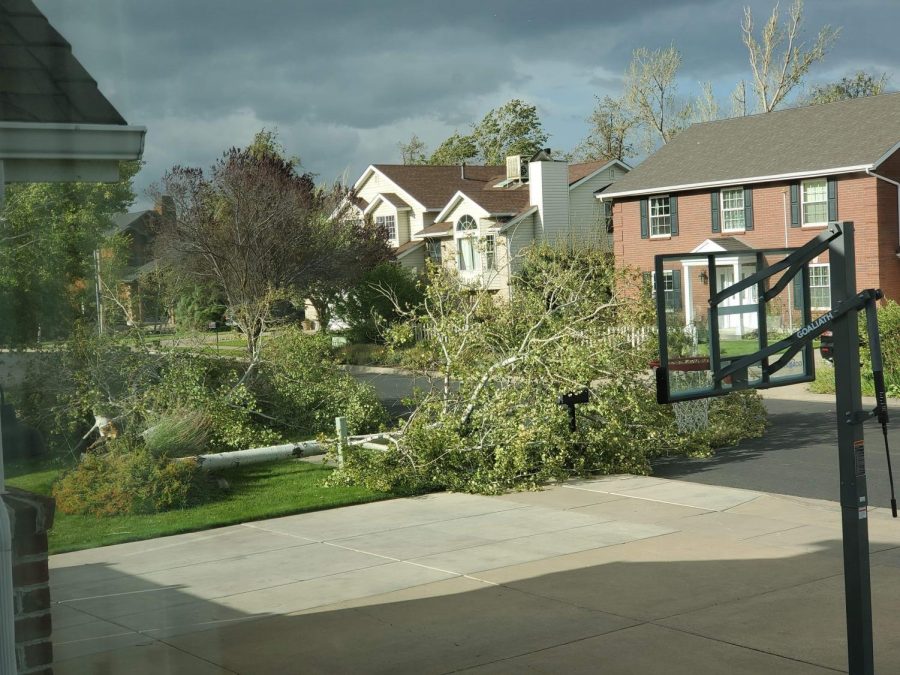 Tree blown over after the winds reached over 89 miles per hour.

Hurricane-Force winds in Utah? Widespread damage, week-long power outages, and much more destruction was caused by these violent winds, leaving Northern Utah homes and properties destroyed. Many areas such as Rose Park, Taylorsville, and Salt Lake were hit harder than other areas in Utah by these winds. About 78,000 homes were still without electricity that Wednesday and schools were forced closed due to the power outages.

These violent winds left students at Juan Diego without any power for days. Gage Gardner, a student here at Juan Diego, was left with no power for three days. “I lost power for 3 days. My mom works from home and she had to shut down her credit union for 3 days and our whole neighborhood was trashed.” Gage Gardner said. “We lost power for a few days, roofing, trees, decapitated power lines, and when we went to get on the freeway, there were semis blown over.” Gardner finished. Those who worked from home were seriously affected by these winds. Due to power lines blowing over, people who worked from home had to completely stop because there wasn’t any power whatsoever.

Many students at Juan Diego experienced power outages in their homes, which set them back. “No buildings were destroyed near my house, but a few electrical towers fell which messed up our neighborhoods power for a full week.” Senior Carter Sears says, “I couldn’t do my homework because my Wifi was out the whole week, so it set me back.”

These winds caused many houses to blow off their roofs or push trees to fall on top of those homes, but Sayda Worall says that her home wasn’t as affected by the winds as other homes around her. “The windstorms up by my house affected my family in a few ways,” Sophomore Sayda Worall said, “We lost many hundred-year-old trees in our backyard, the power at our house was lost for 3 days and all of our pool furniture blew into the ravine on the side of the house.” Worall finished. Due to all of the destruction, it might take a while to repair all of those damages, as well as a lot of money. All of these destroyed properties and homes left families without any shelter.

Not only did these winds destroy homes, but destroyed buildings and places here in Utah such as Lagoon. Trees fell on cars on properties, semi’s were pushed over, and left individuals with destroyed homes and no work, as well as schools being shut down due to no power. These winds affected the whole state of Utah, and was named “a historic 40-year storm.” Although the effects will still be felt, thankfully places have received power again.